The theme of this week’s show is: “Making friends out of the people you do business with”, a “coffee table” conservation with Nick &John Paolella Co-founders of Jon Don, Inc… 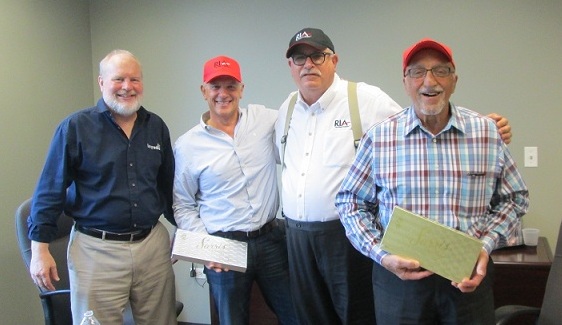 The theme of this week’s show is: “Making friends out of the people you do business with”, a “coffee table” conservation with Nick &John Paolella Co-founders of Jon Don, Inc. Please note this week’s show has a special start time, 2:00pm Eastern Time! The Z-man has been in Chicago all week as part of the Restoration Industry Association’s (RIA) Certified Restorer (CR) instructional team. Jon Don’s corporate headquarters in Roselle, IL is serving as the host facility for this year’s CR prep week. Radio Joe is flying into Chicago to join the Z-man for an intimate interview with the founders of IAQ Radio’s Marquis sponsor. Global Watchdog Pete Consigli also in town with the CR instructional team in his role as RIA’s Director of Education and will join the group around the “coffee table” for this most unique show. Jon Don is known for its legendary customer service and unparalleled support of the industry associations, trade shows and educational & certification programs. This is evident in its pioneering flagship program called, “Strategies for SuccessÂ® Intensive Training Seminar (SFS)”. Nick and John will share their thoughts with the IAQ Radio’s audience on how making friends out of the people you do business with can dramatically help your company be more successful. Success in business and life is about developing mutually beneficial relationships. Give as much or more than one takes. Teddy Roosevelt has a well known quote that says, “Every man has an obligation to give back to the industry from which he derives his livelihood. Jon Don and its people serves as a model for the spirit of that sentiment. Join us this week and get insights on how to succeed by giving others what they want first and then getting what you want. Take care of your people who will take care of your customers and build a business that will take care of the owners!

Making Friends out of the people you do business with

Nick Paolella started Jon-Don in 1978 with his cousin John Paolella. Over the last thirty years Jon-Don has grown into a national company with 11 locations and over 250 employees. Nick lives in Medinah, Illinois with his wife Judy, and John lives in downtown Chicago.

In typical Jon-Don fashion our IAQradio on-location interview with Nick and John was serious business blended with fun and laughs.

According to Nick, work ethic and dedication to family were two things he saw in young John that made him an ideal future partner. John was the hardest worker in the company where they both previously worked; quickly moving up the ladder from working in warehouse to running the office. Friday after work when the guys went out for a few beers, John always went home.

The most valuable business lesson of “how not to run a business” was learned from their former employer a bad businessman. After starting their own business, when decision making time would come John would consider what would our former boss do in each situation and then consciously do the opposite.

Wanting to stand out from their competition who also sold janitorial and sanitary products they focused on carpet cleaners who needed and wanted business advice. Nick and John sought to start a business to take care of their families. As the company has grown each employees has bought into the founder’s philosophy. The company has many long term employees. The same founding values from 1978 remain in place today.

What does communication mean? Nick: “When I talk to you, you must listen. When you talk to me I must listen.” John, chuckling that they have had few disagreements over the course of their 39 year business relationship, mentioned he was once disappointed in the quality of hockey tickets that Nick once bought for him.

What advice do you have on building strong and enduring business partnerships? John: Understand what each party brings to the table. Identify strengths and the business role each plays. Shut out outside influences. Put your partner’s needs alongside your own. Think what works best for both of us. Avoid making decisions that cause resentment. Resentment is entrapment which can be difficult or impossible to get past.

Nick: John and I always shared the same goal. John wanted to get there really fast and I was more patient, we shared the same goal and we achieved it. An enduring partnership, for 39 consecutive years Nick has called John on June 15 to wish him a happy business anniversary.

What are the cornerstone principles of your business? John learned from his father: the value of valuing people. Due to the internet, continuous improvement is mandatory. Service to the customer above all else. Serving the customer feels good and we can make a living doing it. Respect, communication and integrity. Zero tolerance for disrespect. Change is inevitable. What was special 5 years ago is the baseline today. If you still are doing what you did 5 years ago you will be out of business. People in unrelated businesses will be in your business soon, if not today.

Learning to be better at what they do. “While the industry was entirely focused on technical training, you took a different path, what is Strategies for Success (SFS)?”  John and Nick: SFS evolved out of customer’s need for business advice. The SFS instructor team of Bill Yeadon, Steve Toburen and Chuck Violand shared the owner’s vision and commitment. Personal touches, Nick’s daughter Angela is the SFS onsite course coordinator and hostess and Nick is often found behind the grill cooking for the students. The 900 page course manual is loose leaf. Team Jon-Don is obsessed, compulsive and neurotic about providing SFS’ attendees what they need and improving the course.

What are some keys to finding and retaining good employees? John: Looking for employees who care. Jon-Don hires people who care about people. Caring is either in the DNA or taught by your parents. Jon-Don looks for employees who are willing to get up early on a weekend morning to help a friend move for the 3rd time not the ones who show up at 4:00 PM to drink the beer. Looking for employees who embrace change, not run from it. Nick Paolella’s father told him that “if you have a job you don’t enjoy that is interfering with your play time, quit your job.” According to Nick, you must have a job you enjoy doing so you can play. You can play hard, but must show up at 08:00 AM to answer the bell. John: Put the right people in the right places where they can succeed. You will not motivate unmotivated people. Motivated people are quickly demotivated. Take your time hiring, hiring the wrong person is problematic.

Nick: We work very hard to make friends out of the people we do business with. It’s wonderful to give money to people you like when you buy stuff. Rewarding when you receive an order from a customer who likes you.

Nick: The most rewarding feeling is when customers tell us we’ve made a difference in their lives or businesses.

Positive outside business influences. Nick’s former boss enrolled him in a Dale Carnegie course so that he could train sales personnel. The course had a profound effect on Nick’s career. John: Jon-Don’s business philosophy and values are in sync with the book Good to Great. The majority of John’s reading is done to his seven grandchildren. Bill Yeadon is JonDon’s official business book reader.

According to John, Jon-Don looks for markets where they can provide value. Ideas for new product lines come from customers and vendors. Their litmus test is, “if we were a buyer for the product would we buy it from us?” All the markets that Jon-Don is engaged in are growing. Jon-Don believes every product their customer’s buy is in their customer’s best interest. Jon-Don looks for technical staff with a knowledge pedigree in all of their market sectors.

Suggestions for working with associations:  Associations do provide a valuable education service for members. Trade shows need to drive people to the exhibit hall. Don’t hold classes that conflict with exhibit time. Don’t adversely impact exhibit time with meals or elaborate large scale demos. According to Nick, the best trade show is in Florida when it rains hard, all day every day.

If you had a business Mulligan what would it be? John: Never having enough available space.

Two vignettes about John: Global Watchdog Pete Consigli told a story about John openly sharing with his competitors at a manufacturer’s sales meeting by making a presentation on hiring employees. Nick tells a story about John attending a manufacturer’s sales meeting where he was publicly asked by the manufacturer to tell his competitors how he managed to sell $1,000,000 of their product? John’s 2 word response was quick and short, “next question?”

Citing parallels that Jon-Don shares with Nordstrom’s and Hewlett-Packard, Pete sums up Jon-Don’s success in core ideologies: doing what you can be you be best at, doing what you are passionate about, providing superior customer service continuous improvement, importance of execution; adding profit isn’t a dirty word.

Working at Jon-Don is being part of something special.

Listeners can become a customer and learn more about Jon-Don at www.jondon.com

The Curse of the Billy Goat is a sports related curse that was allegedly placed on the Chicago Cubs in 1945, by a fan asked to leave the ballpark because the odor from his pet goat was annoying other fans. What was the goat’s name?